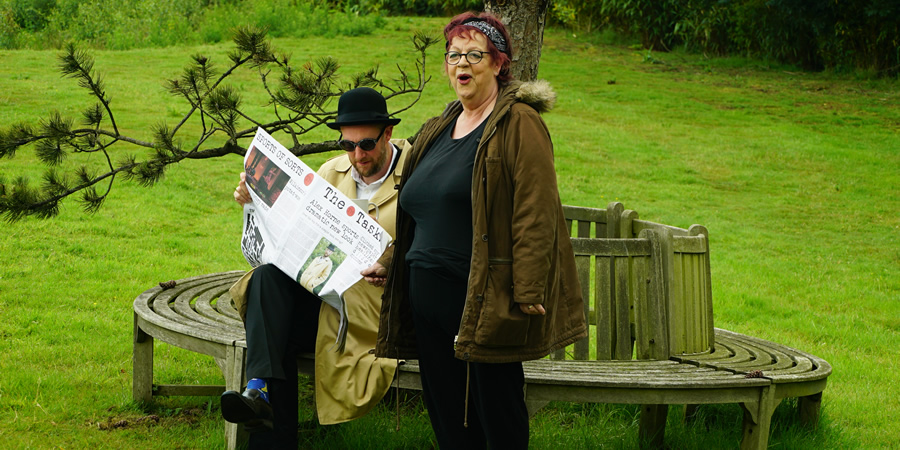 The five comics go undercover as they try to impress Greg Davies with their attempts at high-level espionage. Results, involving a white van, a newspaper and a paper cup, are mixed. Meanwhile, Greg's simpering secretary Alex Horne observes with barely concealed glee as Ed Gamble shaves his knees and Jo Brand finds an alternative use for her earring.
Preview clips

* David Baddiel: A trophy for winning the quiz show Going for Gold, despite the fact he never appeared on it and that the show never gave out trophies. - 5
* Rose Matafeo: A semi-nude picture of herself in a snow globe. - 4
* Jo Brand: Butterscotch Angel Delight concealing Action Man's genitals. - 4
* Katy Wix: A pebble onto which she has put on her bank details. - 4
* Ed Gamble: A voucher for the winner of the show to wax Ed's chest. - 4

Task 1: Give Alex the five-word instruction in the most spy-like way. You must not be seen or heard communicating with Alex in any way. Most subtly but successfully communicated instruction wins. You have 20 minutes, in which Alex must carry out your instruction. Your time starts now.

Task 2: Inflate, tie and pop as many balloons as possible in ten minutes. Once you pop your first balloon, you may not inflate any more balloons. If any of your balloons are still inflated after ten minutes you are disqualified. Most popped balloons wins. Also, you may not look at a clock or any sort of timing device at any point. Your time starts now.

Give Alex the best instruction as a spy

The contestants have to give Alex the the best instruction in the most spy like way.

Make a knee or elbow into a famous couple

The contestants have to make their elbows or knees in to a famous couple.

Alex Horne gets awkward again when he has to hold Rose Matafeo's bra...