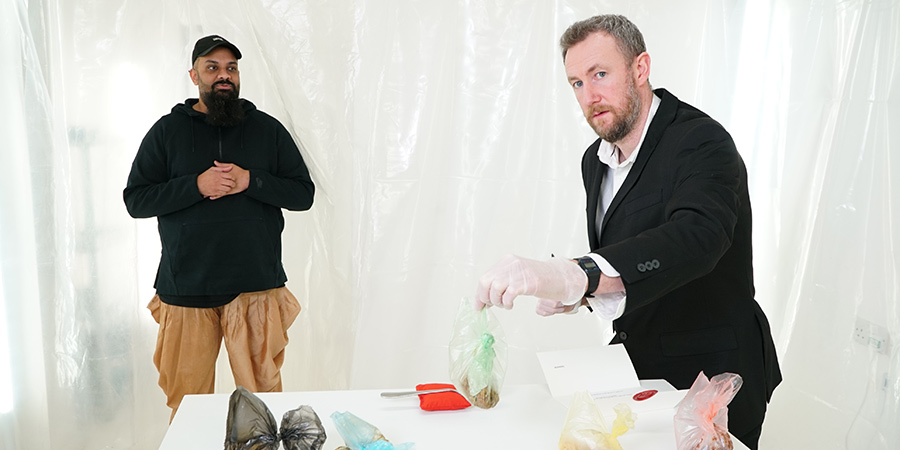 The five comedic contestants continue competing against each other but for the first time this series, they'll need to show off some teamwork as they are faced with a mountain to climb. Alex Horne keeps a diligent record of events as Morgana Robinson investigates some suspect doggy bags and Guz Khan slaps a bouncy rabbit.
Preview clip

Prize task: The most awesome square

* Guz Khan: A piece of fan-art made for Guz, which was a portrait of him constructed in LEGO. - 5
* Alan Davies: A square he painted, put on it cut-out letters reading: "An awesome square", and stuck it to a three litre box of rosé wine. - 4
* Victoria Coren Mitchell: The triple word score square from a Scrabble board. - 3
* Morgana Robinson: EastEnders' Albert Square in a snow globe. - 2
* Desiree Burch: A paper fortune-teller square. - 1

Task 1 (Team Task): Scale the mountain. Your attempt must last exactly five minutes and will be sped-up by five times afterwards. Most thrilling ascent wins. You must start your ascent within the next ten minutes.

Task 2: Work out the contents of these bags. You may not open the bags. You can either a) ask Alex to make one tiny hole in each bag and have five minutes examination time, during with you must eat one big spoonful from each bag, or b) ask Alex to put all the contents in a blender for one minute, and then have ten minutes examination time during which eating is optional. (Correct answers: Nutella and nachos, cabbage and caramel, gravy and granola, banana and Bovril (Marmite for vegetarians and vegans), mustard and mayonnaise.)

Live task: Put on the medallion. You must not take off your jacket or break the box. Fastest wins.

Taskmaster has been hit with transmission problems for the second time in as many weeks. The show went out last night with no subtitles, a week after Channel 4 aired the incorrect edit with all the swear words bleeped out. The issue - which also affected Joe Lycett's Got Your Back and other shows across several broadcasters - was down to the company responsible for transmitting the programmes, Red Bee Media.