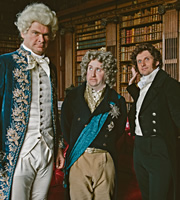 In today's episode, Queen Victoria's coronation doesn't go quite as planned, George IV pulls out all the stops to impress his guests on Historical Come Dine With Me, ancient Greek bighead Alexander the Great refuses to stop conquering things, and the HH Sport team report live from the horrible pirate races.

Alexander The Great introduces himself via the medium of music.