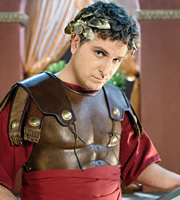 The surprising identity of Britain's top-scoring footballer is revealed, things get ridiculous on Germany's version of Historical Who Wants To Be A Millionaire, a Celtic farmer isn't terribly keen on plans for Hadrian's Wall, and the brainy pioneers of transportation sing about their inventions.