Martin and Louisa invite the chairman of her school's board of governors for dinner, but the evening ends in disaster. 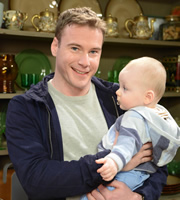 It is Louisa's first day back at school and their new child minder, Mel, is late for work. When Mel finally does arrive Martin is dubious about handing James over to this woman who is constantly scratching. That evening Martin has to go to the school concert. He tries to be sociable and ends up inviting Dennis Dodds over for dinner. Dennis is the chairman of the school's board of governors and in Louisa's opinion he is a pain in the neck.

The next day Martin insists the new nanny has a medical appointment to diagnose the cause of the itch. When he tells Mel the cause is an infection which is common in fat people, she is furious and hands in her notice leaving Martin holding the baby. Martin has to look after James whilst trying to see to patients.

Mike Pruddy turns up to check on the electrics, he is a natural with James and Martin gets Mike to look after James for the rest of the day.

Ruth has been roped into doing a phone-in programme on Radio Portwenn with Caroline the DJ. A listener called 'Cliff' phones in saying he finds it difficult to make friends. 'Cliff' is really PC Penhale, but Ruth is unaware of this. Ruth gives Cliff some advice: to make friends you have to be nice to people, so Penhale goes into nice overdrive.

When Louisa learns that Martin got a stranger to look after James, she is furious. The argument erupts just as Dennis and his wife Karen arrive for dinner, both looking like they have had a bit to drink. The dinner is a little awkward and Martin looks down on both Karen and Dennis for drinking, which irritates Louisa.

When James starts crying Louisa goes up to check on him, telling Martin to come with her. Louisa admonishes Martin for being rude to their guests, but admits that both Dennis and Karen are annoying and have a drink problem. As they head downstairs they enter a stoney cold silence and twig that the baby monitor is on... Dennis and Karen heard everything!

Morwenna is feeling lonely, she misses living with her grandfather. She is also struggling to pay the bills, so she decides to advertise for a lodger. But when Crystal and her boyfriend turn up or the room Morwenna quickly turns them down as completely unsuitable. Bert drops a bombshell on Al; he has rented out Al's room to visiting tourists and Al is going to have to share a room with his old dad.

After a sleepless night next to a snoring Bert, Al realises he needs to find somewhere else to live. He hears Morwenna is looking for a lodger.

The next day PC Penhale is on his charm offensive in a bid to win friends. He flatters Dennis and even continues to be nice after Dennis accidentally crashes into his police car. Penhale presumes that Dennis is drunk as he is slurring and stumbling and asks him nicely to do a breathaliser test, but a furious Dennis won't cooperate. Mr Nice Guy Penhale snaps and forces Dennis to do the test, which turns out to be negative.

Louisa tries to apologise to Dennis for the night before; but Dennis is full of anger after crashing into PC Penhale's vehicle and being falsely accused of drink driving. They have an argument and Dennis falls off his balcony. Louisa calls Martin. Dennis isn't seriously hurt, but Martin realises that Dennis has slow reflexes and has Parkinson's disease, not a drink problem.