Penhale spreads pandemonium throughout the village and Bert pops the question to Jennifer. 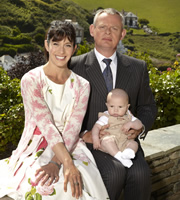 Mrs Tishell and Jennifer continue their battle of wills in the chemist when Louisa comes in and asks for something to help with sleep. Jennifer suggests lavender oil, which Mrs Tishell dismisses as a herbal remedy. This doesn't put Louisa off and she douses Martin's pillow with the oil, but Martin can smell it a mile off and Louisa has to come clean.

Malcolm Rayner, the village hypochondriac, has a splinter. When it is easily removed and he realises the consultation is nearly over, he mentions a cough. The Doc tells him to take lemon and hot water and come back if it persists.

Ruth notices that Al is a little off his stride and he confides in her that he is feeling lost, he hates living with Penhale. Ruth gives him a pep talk, he is in control of his own destiny. Al realises he has to make his own luck and pitches Ruth a business proposal. Ruth picks holes in his proposal and tells Al he has to think his ideas through if he wants to succeed.

Bert and Jennifer are getting closer. Mrs Tishell and Jennifer both get a letter from the Pharmaceutical Council saying that Mrs Tishell no longer needs supervision. Jennifer is worried, her next position is in Woking. Bert is miserable about Jennifer leaving and Al tells him he should do something to get her to stay. Bert does... he proposes!

Malcolm goes back to the doctors, he is really struggling with his breathing. The Doc listens to his chest and fears it could be something serious. Malcolm needs to go for an x-ray. The Doc asks Malcolm if he has ever worked with asbestos. Malcolm used to do roof conversions and could have.

Hypochondriac Malcolm drowns his sorrows in the local. Penhale gets called to pick up the drunk and woeful Malcolm from the pub a couple of hours later and brings him back to the police station so he can sleep it off.

Penhale puts up asbestos warning notices all over the village, accidentally stapling his hand to a post. The Doc has to sort it out, but his blood phobia rears its ugly head in public and he is sick over Penhale.

Louisa hears on the grapevine about this and confronts Martin about his blood phobia and why it is back. She worries it is to do with their relationship, in the midst of the argument there is a knock at the door... It is Martin's mother, Margaret, coming to tell him that his father has died.

Louisa finds it difficult having Margaret as a house guest. She is just as awkward as Martin. Martin is hiding from his mother in his consultation room and Louisa drags him into the kitchen so they can talk to one another. Her plan doesn't work. Margaret plays the doting grandmother in front of Martin and Louisa, but as soon as they leave the room, she dumps James on Mike.

Mike asks Morwenna out. She is a little shocked but says yes. Mike and Morwenna have an awkward date, they just don't get on.

Martin's surgery is inundated with people all concerned they have been affected by the asbestos problem in the village. Martins storms out to find Penhale, who is in the midst of an asbestos investigation in the police station.

The next day Malcolm misses his doctor's appointment. Martin sends Morwenna out to look for him. She finds Malcolm collapsed in his garden and calls the Doc to come round to resuscitate him. Martin explains that as Malcolm is a pigeon fancier his lungs have got inflamed because he allergic to their faeces.