Portwenn is buzzing with arrangements for the wedding of the Doc and Louisa. Will they finally tie the knot, or will the villagers have to put the confetti back in the box again? 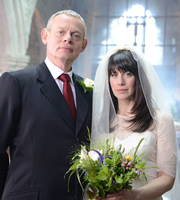 Wedding bells are ringing for the Doc and Louisa. But will the marriage finally go ahead? The Doc is irritated by PC Penhale, who wrongly presumes he is best man, plus Louisa is late... The Reverend has his doubts as to whether she will turn up, putting Martin on edge. But she does, looking beautiful and at long last they tie the knot.

Later at the wedding reception Martin is even more irritated by the swarms of villagers who have turned up to celebrate; he thought it was going to be a small wedding.

Louisa gets defensive; she thinks it is lovely that the villagers have turned up to wish them well. They try to sneak off early from the party, but Bert reveals he is driving them to a secret location for their wedding night. Louisa is thrilled thinking that Martin has arranged the surprise. But it is actually a present to them from the villagers. Ruth offers to look after baby James Henry for the night.

The honeymoon lodge is in the middle of nowhere and is perfect, apart from Bert driving off with their suitcases. They light a fire and settle down to enjoy a glass of champagne, but smoke fills the room, the chimney is blocked. They manage to put the fire out, but the room is ruined.

Martin charges off into the night to find some help; Louisa teeters behind him in her wedding dress and heels, trying to keep up. As time ticks by, it is getting darker and Martin and Louisa start to bicker; Louisa is adamant they are lost. They hear a blood curdling scream and a man shouting. Martin is terrified, but Louisa is a country girl and knows it is just a farmer scaring off foxes. She perks up; where there is a farmer, there must be a farm house, and a phone.

Ruth is having a hard time looking after James. He refused to eat his dinner and he won't settle, crying continuously. To make matters worse, they have a power cut. Ruth calls Al out, but he is unable to fix the problem. Al calls a mate to help. PC Penhale notices the candle burning at the Doc's and comes to see if everything is alright, trying (uselessly) to help. Bert comes round to see how Al is getting on; it's a full house!

Finally Al's mate, Mike Pruddy, arrives - he was an electrician in the army. The lights are fixed and Mike is a dab hand with children. He points out to Ruth that James is teething and some vanilla essence applied to the gums soothes him. James falls asleep, much to Ruth's relief.

Instead of a farmhouse Martin and Louisa find an old, shambolic caravan. In the dark Martin stumbles over a chicken hatch, breaking it and the chickens escape into the woods. A crazy old man called Bellamy orders them to sort out his coop, waving a shot gun. Nervously Martin tries his best, whilst Louisa runs about trying to collect the chickens. Martin does such a bad job that Bellamy takes over. Martin has to hold the pole in place, but as Bellamy is swinging his hammer, Martin moves. Bellamy over shoots and pulls his shoulder out of its socket. Martin quickly puts his shoulder back in place.

But then Martin knocks over the front porch of the caravan which collapses onto Bellamy. Blood is pouring from the wound and Martin has to perform emergency surgery with Louisa by his side. They save Bellamy's life, and the disaster brings them closer together.