Series 6, Episode 4 - Nobody Likes Me

When Martin is talked into taking baby James to playgroup, he is forced to sing along with the other mums. 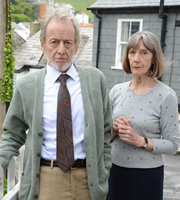 Family life is invading Martin's once tranquil existence, clutter and noise is everywhere.

Louisa wants Martin to engage more with James. She arranges for Martin to take James to play group and he has to sing songs with the other mums whilst the annoying Millie shoves a dirty sock puppet in James' face. The parents have to pair up, James and the Doc are put with mum Trace and daughter Shona. Trace confides in Martin, she is worried about Shona as she is slow at grabbing objects. Martin infuriates Trace by saying that Shona is probably just backward.

Al helps Ruth move into a cottage in the village. She meets her new neighbour, Mr Moysey, a grumpy old man who doesn't want Ruth pestering him. When Mr Moysey goes to get a repeat prescription for his asthma. The Doc checks Mr Moysey over and notices that his breathing has worsened. Mr Moysey is irritated, he just wants his prescription, not to be poked and prodded. Whilst he is at the Doc's his nose starts to bleed. Martin advises him to stop using nasal decongestants.

Al admits to Ruth he wants a girlfriend. Later that night Al asks Morwenna if she has any single friends who may be interested in dating him. Morwenna asks her friend Janice if she would like to go on a date with Al, but Janice is less than impressed with this suggestion. He decides to sign up to Cornish Couples... a dating website.

Mrs Eddy comes in to see the Doc with a "malignant mole", she is sure it is going to kill her. Martin says it is actually a raised lymph node, caused by a localised infection, which for some reason has a dark colour to it.

He discovers that Mrs Eddy has a home made Do Not Resuscitate tattoo which has become infected, the dye has travelled to the lymph node staining it blue. Her elderly friend Ethel has done the same. Whilst the Doc examines Ethel he notices she has a rodent ulcer on her neck. Rodent ulcers are cancerous, but luckily easily removed.

Bert helps Jennifer move into his place. Everything is going well until he catches her with a needle in the bathroom. When he questions her about it, she fobs him off by saying she is diabetic, but this doesn't add up to Bert, she has lots of sugary food in the fridge. Bert thinks Jennifer could be a drug addict and investigates.

Jennifer is acting strangely and has started wearing an eyepatch, when pushed by Bert, she is forced to reveal a droopy eye. Bert is worried for her, she could have had a stroke or have a brain tumour. He makes her go to see the Doc. The Doc examines Jennifer, her eyelids won't close which could lead to an ulcerated eye. After seeing a puncture mark on her skin, the Doc realises the stupid woman has paralysed her eye muscles by giving herself botox.

Jennifer feels a fool but Bert takes her for a drink, telling her she is still as pretty as the day he met her.

Ruth's ceiling collapses and she calls Al out. He discovers there is a slow leak in the roof coming from her next door neighbour - Mr Moysey. They go round to his house to see if they can stop the leak, but Mr Moysey shuts the door in their faces. Ruth enlists the help of Penhale and they finally gain access.

Al manages to find the leak and they discover that Mr Moysey's house is filled with piles of paper, plastic and tin cans everywhere. He is a hoarder.

Mr Moysey goes back to see the doc. He is still getting the nose bleeds and is feeling tired, exhausted, like a bus has run over him. The doc prescribes some anti inflammatories and tells him to come back in a week if the symptoms persist.

Penhale asks the Doc if he can borrow Buddy to train him to be a sniffer dog. Buddy proves to be a naughty little rascal, running off with the decoy stuffed toy.

Millie drops round a photo of the Doc and James with Trace and baby Shona taken at playgroup. The Doc takes one look at the photo and spots that baby Shona has a cataract in one eye (as one eye has red eye - the other doesn't). He refers her to an opthalmology unit to have it operated on.

Ruth hears Mr Moysey collapse next door and gets Penhale to break into Mr Moysey's. Martin is called round and discovers contusions on his chest. He is confused, then sees cans everywhere. He questions Mr Moysey about his diet, he only eats food from tinned cans, no fresh fruit or vegatables.