Louisa is leaving for Spain, Bert struggles with party plans, and Al is hailed a hero for saving Caroline's life. 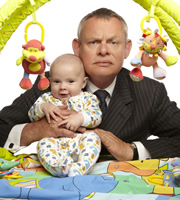 Louisa is leaving for Spain with baby James and says an awkward goodbye to Martin. Martin goes back to his consultation room, but is distracted and walks out. He goes to find Ruth, who is relieved that he has finally come to ask her for help. She tells him that all his problems stem from his childhood, because his parents never showed him any love. She also tells him that he has the propensity to change.

Al has a meeting with Ruth to pitch her a business idea and needs to get away to finish the presentation, but Bert manages to rope him into helping out. The generator Bert hired isn't working, so they use extension cords from the restaurant to the beach. Finally Al manages to escape and rushes off to Ruth's, dropping parts of his presentation en route.

Martin decides to confront his mother and find out why she really came to Portwenn. Margaret tells Martin that she doesn't want to make the same mistake his father did. On his death bed, Christopher, Martin's father, wished that he could apologise to Martin, tell him he loved him.

Martin asks if his father died from a stroke, how could he talk? Margaret realises she has been caught out and reveals the real reason she is there, she needs money. Christopher left her high and dry and she needs a couple of hundred thousand to buy a cottage in the country.

Al meets Ruth at her farm. He pitches her his vision: The farm house is turned into a bed and breakfast for fishermen who fish on the lake / river running through her land. Ruth is less than impressed with the crumpled bits of paper she is handed. Al knows he has blown it.

Invigorated by confronting his mother, Martin tries to book a flight to Spain to get Louisa back. Whilst on hold he sorts through his mail and finds the scan of Louisa's brain. He spots a malformation. The pressure in an airplane could trigger it to bleed and Louisa has recently taken anticoagulants. If the malformation were to bleed, she could suffer a brain haemorrhage.

Martin tries to call Louisa to tell her not to get on the plane, but she thinks he is just trying to stop her leaving and hangs up on him. Martin has to race to the airport to stop her.

Al is glum and tells Morwenna about his disastrous pitch. Janice, Morwenna's friend, points out to Morwenna that she is always talking about Al, perhaps she fancies him. Ruth approaches Al at the party, she has done her own research and thinks the business plan is a good idea. Al is thrilled and goes to tell his dad, they make up.

Bert can't fix the electrical problem, it keeps tripping. He rams a nail into the circuit board to circumnavigate the trip switch, without repairing the fault. Caroline hears the music come on and pics up her mic to get the party started, but it was the mic that tripped the electricity and a massive electric shock throws her off the music platform.

Morwenna checks Caroline's vital signs - no pulse. They phone the Doc who tells them to get a defibrulator kit. Al races off to the Life Boat Station and comes back with the kit. He shocks Caroline's heart and saves her life.

Morwenna is so impressed with Al that she engineers a date for them that evening.

Meanwhile Louisa has arrived at the airport and is struggling with a headache...