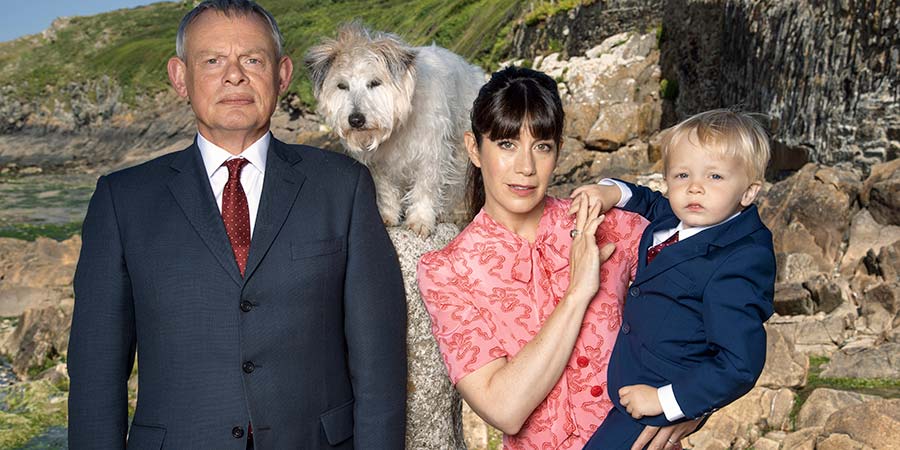 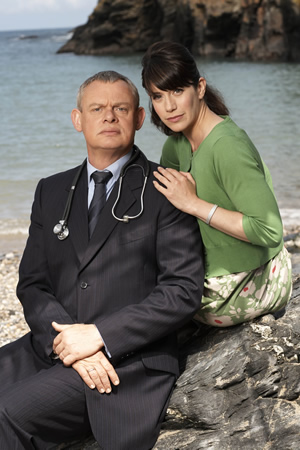 The character of Dr Martin Ellingham, whose truculent and tactless manner has upset the entire population of Portwenn at one time or another, has been a hit with viewers ever since Doc Martin debuted on ITV in 2004.

The series, however, has earlier roots. 2000 saw the release of feature film Saving Grace starring Brenda Blethyn and Craig Ferguson, the latter of whom also co-wrote it alongside producer Mark Crowdy - now one of Doc Martin's executive producers.

Another star of the film was a certain Martin Clunes, playing Dr. Martin Bamford. He would reprise the role in a one-off TV special, a prequel to Saving Grace, made for Sky's movie channels, 2001's Doc Martin. The feature-length special was successful enough to spawn a sequel, and in 2003 Sky Movies Premier broadcast Doc Martin And The Legend Of The Cloutie.

Having originally intended to produce another film about Martin Bamford - a London obstetrician who escapes to Port Isaac after discovering his wife to be having an affair - the deal is understood to have fallen through, leading to the production company - Clunes's own Buffalo Pictures - to take the format to other broadcasters. ITV were interested, but wanted a number of changes to be made: the Doc Martin we today know was born.

The first, six-part series was broadcast on ITV1 during September and October 2004. A huge success from the very first episode (attracting an average of well over 9 million viewers each week), a second run was quickly commissioned. It attracted similarly high viewing figures across its 8-week series, between November 2005 and January 2006, returning for a special feature-length Christmas episode that December.

Series 3 would not make it to screens until September 2007, but grew its viewership across the seven-week run and concluded well above the 10 million mark. Fans endured another lengthy wait for the show's return: the 8 episodes of Series 4 did not begin airing until September 2009, again reaching between 8 and 10 million viewers every week.

Series 5 of the show achieved an average of over 10 million viewers across its run, making it one of the UK's top five scripted programmes. Doc Martin is also hugely popular in territories all around the world thanks to the rights being sold internationally. Some countries have gone as far as re-making the show - for example Germany created Doktor Martin, whilst Greece has Kliniki Periptosi.

Martin Clunes is joined in the show by Caroline Catz who plays his long-suffering love interest Louisa and, later, the woman he has a baby with. The couple are finally married in Series 6 after a false-start in Series 5.

The cast list also features Ian McNeice as local restaurateur and handyman Bert, and Joe Absolom as his tolerant son Al. With their restaurant struggling to stay afloat, Bert and Al often dream up money making schemes - the latest of which means Al is going to have to give up his room and look for somewhere else to live.

The show also stars John Marquez as bumbling local police officer PC Joe Penhale, a man who seems to create more problems than he solves in the process of attempting to instil law and order into the community; and Ressica Ransom as Morwenna Newcross, the doctor's scatterbrained receptionist, who's now looking for love online.

Plus Eileen Atkins appears as the doctor's formidable Aunt Ruth. She doesn't suffer fools, just like her nephew, and doesn't think twice about taking on her neighbours and creating confrontation. In the latest series Aunt Ruth decides to move out of the isolated farmhouse she inherited from her sister and into the village.

Over Doc Martin's previous series, other major characters have come and gone. These include Katherine Parkinson as Pauline, Lucy Punch as Elaine, Stewart Wright as PC Mark Mylow and Angeline Ball as Julie Mitchell. There was Stephanie Cole too, who played Ellingham's other aunt in the first four series. Aunt Joan was a woman who despaired at her nephew's caustic comments, but continued to supply emotional support in the face of disquiet among the villagers.

The popularity of Doc Martin worldwide has brought tourists flocking to Port Isaac, the picturesque small Cornwall village the show is filmed in and around. There are organised tours around the village, pointing out the key locations in the series, and fans can buy souvenirs in the local shops. 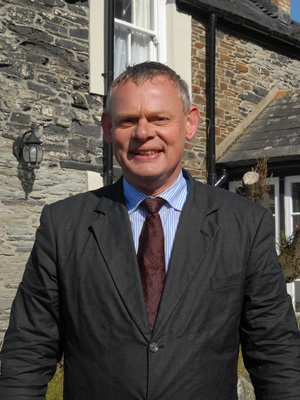 The numbers escalate when there is filming in the village, making it resemble an open air theatre as people line the streets and clifftops to seek a glimpse of the action. Martin Clunes says: "Every time you come back here there seems to be more and more people gathering to watch us filming. People have come from as far as Australia and New Zealand. I miss being in Cornwall for the summer. I do love filming in the village of Port Isaac because I know it always looks gorgeous."

Ian McNeice has become very much part of the community in Port Isaac after playing the role of Bert Large. "Port Isaac is a hugely special place to me. I have been very fortunate because my character is pretty much on the periphery, so I have had a lot of time to get to know the village, and the people. I can't tell you how many fun days and shops I have opened. They introduce me as 'Bert Large from Doc Martin'. I do feel part of the community and I very much value that."

The character of Doc Martin is tactless and grumpy yet somehow he is still massively popular with viewers. Martin Clunes laughingly explains: "Ladies of a certain age who liked me as William in ITV1's William And Mary don't like me being the nasty doctor, but you are not really meant to like the Doc. Heaven forbid that anyone should warm to him. He comes a cropper all the time, and he doesn't try to redeem himself in this series."

Created by Dominic Minghella, Doc Martin is made by Martin Clunes's own production company, Buffalo Pictures. He went solo with the intention of optioning a J.P. Dunleavy novel to make into a television series. He and real-life wife and producer Philippa Braithwaite - whom he met whilst working together on the feature film Staggered - are now directors of Buffalo. Philippa says: "We are always delighted to be back in Cornwall to make a new series. There are always plenty of surprises in store for the Doc, and compelling story lines."

Aside from those original films, there are now eight series of Doc Martin, but with some big breaks left between the series to allow not only great new stories to be written, but for Martin Clunes to star in other shows and produce documentaries.

The actor says he is always pleased to return to the show: "We have been able to rent the same house just along the coast from Port Isaac where we have always stayed. The views from the house along the coast are stunning. It took a little while to get back into the character and into the rhythm of single camera acting. Suddenly you realise it is sort of a second skin and it just lovely being back. The doc's sharp suits and severe haircut help me to get back into character. But it is his trademark curmudgeonly approach to his patients which is the key to playing the role again."