Since Martin and Louisa both got cold feet on their wedding day, Louisa has left, and Martin has been finding life in Portwenn infuriating. 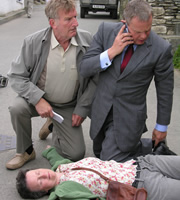 Life in the beautiful Cornish village of Portwenn has become ever more infuriating for Martin since the heart-wrenching decision to call off his marriage to local headmistress Louisa.

Louisa has left the village, and Martin has begun to question what is keeping him in Cornwall for it's certainly not his relentlessly annoying patients and it's certainly not the amorous advances of the infatuated local chemist, Mrs Tishell. Martin has realised that if he is ever to escape, he must conquer his worst fear: the blood phobia that ended his surgical career.

Martin's Aunt Joan suggests that her friend Barbara might be able to help with Martin's blood phobia, but it turns out Barbara is a specialist in a very different field. When Barbara is involved in a bicycle accident with Clive Tishell, Mrs Tishell's little-missed husband who has been sent home from his oil-rig job after going deaf, Martin is injured too.

Martin accompanies Barbara to hospital, and is stunned to meet Edith, his old girlfriend from medical school days. She is now a top-ranking doctor with a flourishing private practice. She is surprised and disappointed at how low Martin has fallen. Later, Edith books Barbara in for an operation, but when Martin discovers Edith did not perform a preliminary test that might rule out the need for surgery, he hurries to the hospital and takes matters into his own hands.

Mrs Tishell tries to cure her husband's problems on her own, but when her efforts go disastrously wrong, Martin is able to find the surprising cause of Clive's hearing loss.

Meanwhile, Martin's scatterbrained receptionist Pauline is struggling to cope with the effects of insomnia brought on by her brother Adam's snoring. Pauline's on-off boyfriend Al Large sees an opportunity, and asks her to move in with him. Meanwhile, Al's jovial father - Bert Large, is also looking for love but does this include sex?

Also, Martin learns there is a prestigious surgeon's job coming free in London that is perfect for him if he can overcome his haemophobia. All Martin's thoughts of the future are thrown aside when Louisa returns without warning - with big news of her own.