Martin seeks out Louisa to talk about his new surgeon's job in London, but they are interrupted by Bert, who wants to plan a baby shower for Louisa. 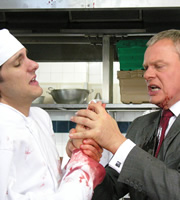 To solve her farm's money problems, Aunt Joan starts a small Bed & Breakfast business. Her first guest, unexpectedly, is another local farmer, Ted, who has also got into financial difficulties. Initially they're a good match, but Joan soon finds that Ted is far from the perfect guest.

Pauline's suspicions are confirmed when she steams open a confidential letter addressed to Martin and discovers his contract offer for the London job. Suddenly insecure about her own future, she confronts Martin, who offers her no reassurances but will write her a reference.

PC Penhale learns of Martin's plans to leave him behind in Portwenn, and offers to transfer to London's Metropolitan Police so they can still be together.
Pauline is very disappointed by Martin's reference, and urges Al to use his influence to change Martin's mind. When Al fails in this mission, Pauline tries to demonstrate her worth, but her plan backfires and Martin ejects her from the Surgery.

Martin struggles to run the Surgery on his own. Joan brings in Ted, who she suspects has had a mild heart attack at her farm. Martin examines Ted, and finds a mysterious lump in his abdomen. Martin books Ted in for some hospital scans.

Pauline and Al enjoy an impromptu afternoon by the seaside, but Pauline is stung by a jellyfish and must seek out Martin for his help.

Joan calls Martin to her farm because she is increasingly worried about Ted. When Martin discovers some bald patches on Ted's scalp, he is able to make a remarkable diagnosis about Ted's illness.

Louisa finds it hard to enjoy her baby shower because everyone wants to talk about Martin leaving Portwenn, but Bert makes an emotional speech that nearly saves the day.

Martin joins Edith at a hotel where she is giving the keynote speech to a medical conference about her research. Edith has booked them into one bedroom.

Martin notices that their room service waiter appears to have the symptoms of a condition that could make him blind, but when Martin attempts to warn the waiter, a shocking and bloody accident is caused.

Martin deals with the accident without hesitation, proving to both him and Edith that his blood phobia is completely cured, and he is now fully able to be a surgeon in London again.