Louisa is hit by a car and is rushed to hospital. She has shock news for Martin. Mike has a shady revelation from his past, and Al's business plan is dismissed by his dad. 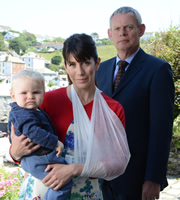 Louisa tries to get Martin to open up about the loss of his father, but Martin says it doesn't affect him. Louisa suggests a break, so they can all get away and spend some time together. Martin doesn't want to and Louisa is hurt by this. Things are strained between Martin and his mother. She is trying to connect with him, but he is cutting her off. She comments that he isn't looking very well.

Martin weighs himself and discovers that he has lost a lot of weight. This triggers something in Martin and he becomes convinced that there is something wrong with him, which is the root of all of his problems. He becomes obsessed with testing himself.

Ruth comes round to see Margaret, to find out why she is in Portwenn. She doesn't believe Margaret one bit.

Martin goes to the chemist to get some supplies and notices that Mrs Tishell holds her jaw when she exerts herself. She frostily tells the Doc that she has toothache. Later that day when she is moving heavy boxes, she gets the pain again. She realises the Doc was right and goes to the surgery. The Doc examines her wrists and eyes, finding fatty deposits and diagnosing her with angina. Mrs Tishell is smitten by the hand holding and the staring into her eyes. She falls head over heels in love with the Doc again.

Al gets a visit at the police station from two Military Policemen, looking for Mike Pruddy. Al pretends not to know Mike and goes to find him and warn him the army are looking for him. Mike panics and wants to flee, but Al calms him down and tells him to take James back to the surgery whist he gets rid of the Military Police from the village.

Al misleads the Military Police, telling them that Mike has done a runner and is hiding up at a barn a couple of villages away.

Martin arrives at the school Sports Day, he is not happy about being there and is concerned about the patients he has left in his waiting room. Louisa asks him to say a few words before handing out the medals, but when on stage Martin is silent, saying nothing. Louisa tries to coax him to speak, but still nothing. Miss Woodley steps in and reads out the list of winning pupils.

It takes ages and half way through the presentation Martin tells all the children who won a medal to stand up and starts handing them out willy nilly. He storms off back to the surgery. As Louisa runs after him, shouting at him to stop she is hit by a car.

Al tells his dad about a business idea he has, to be the middle man between the tourists wanting fishing trips and the fishermen. Bert laughs at the idea, there is no way the fishermen will give him a 10% cut. The wind is taken out of Al's sails.

Mike is stuck at the surgery, the Doc asked him to look after James because Louisa is in hospital. Mike decides to take James to his flat, he needs to pack up so he is ready to go on the run. But when Al and Mike arrive back at the flat, Penhale is there, waiting for them.

Penhale wants to hand in Mike to the army (not the Military Police) and is ready to take him away, when Martin turns up. Martin is furious that James is not in bed.

It all comes out; Mike ran away from the army because they wanted to treat his OCD, but Mike didn't want to be changed, his OCD is a part of him. The Doc makes Mike see sense, he does need help. The OCD is impeding his everyday life. Mike agrees to go back to the military and face the music.

After taking Mike back to his barracks, Al goes to see Morwenna to tell her that Mike won't be taking her out that evening. She isn't that bothered.

Louisa has broken her collar bone and is annoyed with Martin. Martin spots that Louisa is coughing and suspects she has a deep vein thrombosis. He blames the hospital for not turning her during the night. Louisa is embarrassed and tells Martin to leave.

Later that day, when Martin collects Louisa from hospital, she tells him that she needs a break and is going to Spain to stay with her mother - just her and James. Martin is shocked.