Series 6, Episode 3 - The Tameness Of A Wolf

One of Louisa's pupils blames an upset stomach on a meal she ate at Bert's restaurant and writes about it in the school magazine. 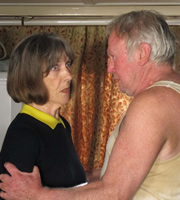 Two fisherman wake the Doc and Louisa at the crack of dawn - they found a man collapsed on the beach. Martin examines the mystery man. His name is Robert Campbell. When Robert realises the Doc is Dr Ellingham, he starts to probe Martin about his family. Martin doesn't engage.

After examining the man he gives him some rehydration salts and asks Morwenna note his details for the results, but Robert disappears before she has the chance.

It's Mike's first day looking after James. Louisa is frosty with him. When she gets to school she can't help but feel uneasy and sneaks back home to check up on Mike - they are fine. Al moves into Morwenna's.

Robert is in the village and stops dead in his tracks when he sees Ruth. Later when she is having a coffee with Caroline (who is trying to persuade her to do another radio show), Robert is spying on her.

When Ruth returns to her car she finds a red rose on the windscreen. She is unsure who it can be from and is a little unnerved. Robert follows Ruth up to her farm. Ruth isn't sure why, but she is feeling uneasy.

Martin examines Becky Wead, she has an upset stomach and blames it on a meal she ate at the Large restaurant. Becky has written all about it in an article for the school newspaper and goes to press without Louisa proofreading the article.

Becky hands out copies of the school newspaper to the whole village. Bert and Al are furious. They go to see Louisa wanting something to be done, but Louisa really doesn't need this stress.

As they head home Bert sees someone he used to know trying to get into the chemist. Jennifer Cardew is the new locum pharmacist and is staying at the Crab and Lobster. But Bert manages to persuade her with the offer of cheap lodgings to come and live with him.

The next day Ruth leaves the farm early for the radio phone in. She pops in to see Martin, it's her birthday and arranges to have lunch with him later that day. Robert is in the local shops and hears that Ruth will be on the radio. Knowing that she is at the radio station, he phones into the show from her house. Robert asks Ruth if he should tell the woman he loves that he loves her. Ruth tells him yes.

Martin tells Becky Wead that her stomach pains are from an ulcer not food poisoning. The article she wrote was a complete lie.

Ruth arrives home from the radio interview to find a birthday cake on her kitchen table. She presumes it was Martin. But it wasn't. Ruth admits to Martin that she thinks she has a secret admirer who is putting her a bit on edge. Martin is shocked that she could have an admirer at her age.

Martin confesses to Ruth that his hemophobia is back. Ruth tells him it is because he never dealt with it properly in the first place.

Martin gets the results in from Robert's blood test, he has diabetes and needs to be contacted immediately.

Morwenna doesn't have his details. She calls Penhale who is checking a car blocking an entrance to a field. It's Robert's car and Penhale finds a copy of Ruth's book inside, with obsessive notes written all over it. Martin realises something is wrong and races to the farm.

At the farm Ruth hears something upstairs, the bath is running. She goes to investigate and Robert reveals himself. Robert is a former patient of Ruth's and is in love with her. Ruth calmly tries to deal with the situation.

Martin arrives which spooks Robert and causes him to barricade the door so no one can get in. Martin breaks through, explaining to Robert he has diabetes and needs treatment.

Penhale arrives which stresses Robert out even more. Ruth tells Martin that perhaps he needs to give Robert some sedative drugs, rather than diabetic drugs first.

There is a tussle and Martin is cut by a knife but Ruth manages to jab Robert with the sedative.