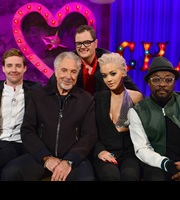 In the first show, Alan's guests are all four The Voice judges - Rita Ora, Will.i.am, Ricky Wilson and Tom Jones - who chat about the forthcoming live shows. Hollywood star Antonio Banderas drops in to talk about his latest film, The SpongeBob Movie: A Sponge Out of Water, plus Steph & Dom from Gogglebox. Music is from Ella Henderson who performs Mirror Man live in the studio.

Danny Dyer was originally billed to appear on this episode.