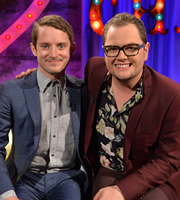 Alan is joined by former soap star Michelle Keegan who drops in to discuss her new BBC drama, Ordinary Lies.

Elijah Wood talks about his role in the new children's animation Over the Garden Wall, and South London magician Troy talks about his latest E4 series where he stuns unsuspecting members of the public with his distinctive blend of close-up magic, illusion and spectacular stunts.

Morrissey was booked to appear on this episode, but pulled out