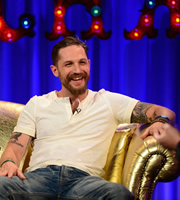 Taking to the sofa for the first episode of the 15th series, Alan will be kicking things off in truly epic Chatty Man style as he's joined by actor Tom Hardy. Tom will be talking about his latest movie, Legend, where he plays both lead roles as the infamous Kray twins, Reggie and Ronnie Kray.

Also musician and actress Demi Lovato will be chatting to Alan as well as performing her latest single Cool For The Summer live in the studio.

Tom Hardy is presented with a fan Instagram account dedicated to pictures of him holding different types of dogs.

Thomas Turgoose shares the embarrassing moment when he woke after a heavy night in Magaluf with a tattoo of his friends names on his bottom.