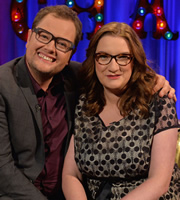 Seeing as she's a fan of the countryside, Alan challenges Sarah Millican to a very special Countryside Test.

How to scrum with Gareth Thomas