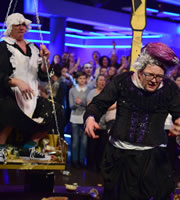 Each team takes it in turns to lip sync to their all-time favourite song, however, when their opponent decides they have mimed badly they will push a button, giving the lip-syncer an electric shock.

Danny goes first against Greg, who shocks Danny 3 times. Greg goes next and mimes 99 Problems with no shocks, when half way through Danny realises he has been pressing the wrong button and shocking himself instead.

Following on from Madonna's fall at the Brit Awards, the teams must stay upright for as long as possible as the steps move and spin round and round, while dressed as Madonna. Danny holds on for an impressive 37 seconds and wins the game.

Up and Downton Abbey

Both teams start perfectly balanced on Mrs Patmore's scales and the object of the game is for Fred to bring Lord Dyer down while on the other end Lord Nish will be trying to bring scullery maid Greg down by weighing the scales down with as many cakes as possible. Whoever is highest when the servant bell sounds wins the game.

The food fight goes awry and Alan as Lady Grantham gets caught in the crossfire, falling over and losing her hat. Following a closely fought battle, Greg's team is the victor.

A story made headlines this year involving David Cameron and a pig. The team tracked down the pig for an episode of Life Stories with Piers Morgan.

Jeremy Clarkson rushes to the studio!

After Alan breaks the news to Jeremy that he is too controversial for this years' Specstacular, he is still very determined to attend.