Series 15 - Stand Up To Cancer special

Thomas Turgoose returns to honour his bet from the first show to have Alan Carr's name tattooed on his bum if £5000 is raised for SU2C. Plus chat with Sue Perkins, Jonathan Ross, Jamie Laing, Fred Sirieix and music from 5 Seconds of Summer.
Preview clips 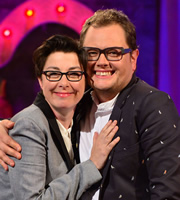 This week's Chatty Man is a special in which Alan raises awareness for Stand Up To Cancer and Cancer Research UK's joint national fundraising campaign, which last year raised over £15.5 million, funding research to save lives across the UK.

Alan supports the cause with some very special guests joining him for more shenanigans.

Made in Chelsea star Jamie Laing and First Dates host Fred Sirieix also pop in for a quick chat ahead of the Celebrity First Dates special for SU2C.

Finally, This Is England '90 star Thomas Turgoose returns to honour his bet from the first show to get Alan Carr tattooed on his bum if £5000 is raised for SU2C.

Music comes from 5 Seconds of Summer who perform their new single Hey Everybody! live in the studio.

Alan discusses the idea of doing Celebrity Gogglebox with Jonathan Ross next year.

Alan Carr and Jonathan Ross visit the First Dates restaurant, and have quite the dinning experience...

Sue Perkins gets emotional over GBBO

Sue Perkins talks about the finale to The Great British Bake Off, and how it made her very emotional that Nadiya Hussain won.