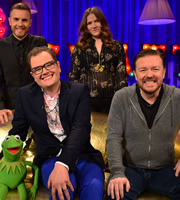 The 2013 BAFTA award-winning funnyman Alan Carr is back on our screens this autumn for the twelfth series.

Making a welcome return to Friday nights on Channel 4, once again viewers can expect more unashamedly addictive celeb fuelled antics, mischievous chat and top musical performances, as Alan is joined by a host of international and home-grown stars from the worlds of music, film, TV and sport.

In tonight's first episode, Alan is joined by singer, song-writer and X Factor judge Gary Barlow. As well as chatting to Alan, Gary will also be performing his latest single Since I Saw You Last live in the studio.

Also on tonight's show, comedian and actor Ricky Gervais will join Alan to talk about his latest film Muppets Most Wanted. Joining Ricky on the sofa are two of the stars of the movie - the one and only Kermit the Frog and his froggy nemesis Constantine (the World's Number 1 Criminal).

Alan chats to some muppets. Constantine shows off her impressions.