Alan is joined by Britain's Got Talent judges David Walliams, Amanda Holden and Alesha Dixon. Jennifer Saunders chats about the her autobiography Bonkers: My Life in Laughs. Noel Edmonds drops by for a chat. The Vamps perform their latest single Last Night.
Preview clips 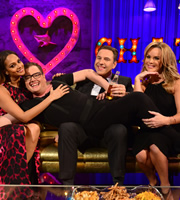 Alan: We've got to talk about Brucie quitting Strictly... Have any of you brushed off your CV's and sent them in? I mean it's the job to have on BBC One!

Amanda: Would you do that David?

David: Well I'd be interested if they offered it to me but they haven't! I think they should annoy Brucie by getting someone older, like Yoda! It's a great show but very difficult filling the shoes of someone who is legendary entertainer.

On saving Simon Cowell from choking:

David: In the show I actually give Simon the Heimlich manoeuvre.

Amanda: He was choking on a mint or a piece of orange.

David: He's always eating something whilst the contestants come on. It's normally orange pieces or mints and he choked on the mint and I actually saved his life and I do regret that!

Amanada: He was seriously choking and David came up behind him and dry humped him! He did the Heimlich manoeuvre. It worked anyway!

Alesha: Have you seen them they are amazing!

Alan: They are getting firmer aren't they!

David: He does special push ups before we record the show because you know he wears the very tight jumpers. He has these things, they're little sort of discs and he puts his hands on them and he does these press ups on the floor to pump them up but you know about 8 hours later they are just hanging there.

Amanda: Well he disappears off and they you just see this body lying on the floor.

David: Sometimes he does them in the toilet. I hate to say it but he sometimes actually uses the disabled toilet.

Alan: You (David) have actually been to Simon's house!

David: I know, I think the girls have been to his house but this was the first time was in the show because I was his chauffeur for the day. You walk in and he has a giant painting of himself.

David: And then he has pictures around the house of not him with other people of him on his own. Don't you want someone else in this picture with you!? He was upstairs in the bathroom when I arrived, he's basically always having a bath.

Amanda: I would say he's content. He seems really happy and in love. I think he thinks that anything like babies and children and people that you fall in love with is boring and normal and not for him and now he's seeing that it doesn't have to be that it's just happy and lovely.

Alesha: He's not softer on the panel though.

Alan: Has he changed on the panel at all?

Alesha: No! He's still as honest.

Amanda: He said today to someone, if I see something crap on stage I'm not going to go "ok you're through", I've had a baby!

David: He was very cocky. Very cocky when we were doing the auditions which were in January and February which was before he had the baby just very cocky that he'd made a woman pregnant.

Amanda: I think David and Simon's relationship has soured.

David: It's very much soured.

Alesha: He (David) doesn't like it when Simon's funny.

David: He has become funny, it's become quite annoying.

In honour of the Britain's Got Talent judges being on the show, Alan decides to celebrate the life of Simon Cowell in the style of previous winners, 'Attraction'.