Alan Carr returns to our TV screens with his very own summer special.
Preview clip 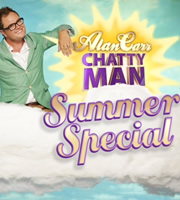 Joining Alan for some summertime fun are comedy queen Miranda Hart who'll be talking about her latest stand-up arena tour. Also joining Alan is Hollywood action man Vin Diesel in to chat about his latest film Guardians Of The Galaxy.

Finally this week the stars of The Inbetweeners 2 movie - James Buckley, Simon Bird, Blake Harrison and Joe Thomas - join Alan on the sofa to exclusively chat about their forthcoming second film release.

Music this week is from Rizzle Kicks, performing their latest single Tell Her live in the Chatty Man studio.