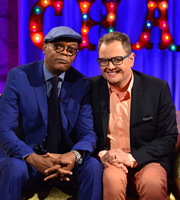 Joining Alan in the final episode of the current series is hit record producer and musician Mark Ronson who drops by for an exclusive chat, as well as performing his new single I Cant Lose, featuring Keyone Starr, live in the studio.

Samuel L. Jackson reads out some of his well known catchphrases while in character as Alan Carr.