Alan is joined for a chat with comedian and actor Peter Kay. US actor Ellie Kemper talks about her Netflix series Unbreakable Kimmy Schmidt, while US singer/actor Adam Lambert discusses his latest album and single Ghost Town. Music is from James Bay who performs his single Hold Back the River.
Preview clips 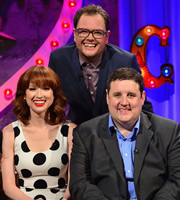 Peter: I am very very proud of Sian [Gibson], who is absolutely amazing and I kept telling her that, that people would love her. She is very humble and she is fantastic in it and they seem to really love her.

Alan: On Car Share, did you do the driving? Can you drive?

Peter: Yes, I can drive.

Alan: How many times did it take you to pass your test?

Peter: Five! I wasn't very good at driving. It wouldn't click. It took me six years: 176 lessons. I started when I was sixteen, in 1990, and I passed in 1996. Best thing I ever did though! So if there is anyone watching and they're learning: persevere. It's the best thing you can ever do. It is!

Alan: How did it take you six years?

Peter: I had five different instructors. I had a guy from, I'll not say his name, Barry, I used to get in and he would say... actually, first of all I wouldn't even drive! I'd sit in the passenger seat and we would drive for about ten minutes to an industrial estate and then we would swap places, and then I'd drive. Why don't I just drive from my house? He'd get his pipe out and some shag and he'd start doing his tobacco and he would talk to me, and then we would have a break for ten minutes. I remember him saying next week I'll bring you some photos from Bulgaria. I didn't book him again.

Then I had another woman called Mandy - she had a clubfoot. I don't know how she did it but she did it. I remember saying to her about a ride at Blackpool Pleasure Beach called 'Grand Prix' but when I were a kid I called it 'Grand Pricks' and I remember saying that to her and she put her hand on my hand and said. "I've had some grand pricks in my time". So I didn't have her again.

My mum can't watch Car Share, well she does but she says, "Peter I cant enjoy it because you're not watching the road". Well I am, but I'm not actually driving, I'm being pulled by a... I don't want to shine daylight upon magic, but I cant act and drive. I'd be all over the road and it's highly illegal, because you're concentrating on something else you see. I am safe, mum.

Alan: Would you ever do radio?

Peter: No. I love radio. I've got an app and I will go on a night, and you can listen from all round the world now. I've always loved listening to the radio, all my life, but I just don't know if I could do it because I just don't feel confident doing radio. I've been offered it but some people just don't feel comfortable doing different things. I think I stumble too much, he says, as he stumbles.

See the video below in which Peter says he's not yet sure if there'll be a second series of Car Share.

Will there be a second series of Car Share?

Peter Kay says he doesn't yet know if there'll be a second series of Car Share.