Alan looks ahead to this weekend's Grand National with some surprise special guests and some equine themed fun and games. With Russell Brand, Game Of Thrones star Maisie Williams, Nick Jonas, Gok Wan and Nick Luck. 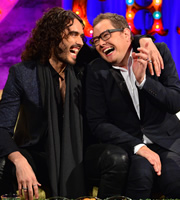 Alan looks ahead to this weekend's Grand National with Gok Wan and Nick Luck who are part of the presenting team on Channel 4, plus some surprise special guests and some equine themed fun and games.

Other guests joining Alan include Russell Brand, who chats about his latest film The Emperor's New Clothes; Game of Thrones star Maisie Williams talks about her role in the new movie The Falling.

Music is from Nick Jonas who performs his new single Jealous, live in the studio.