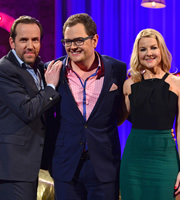 Alan is joined by John Torode and Gregg Wallace ahead of the big Masterchef final. Plus actors Ben Miller and Sarah Hadland drop by to chat about the new Channel 4 Election sitcom Ballot Monkeys.

Music is from The Maccabees performing their new single Marks To Prove It.

Nicki Minaj and Jeremy Piven were originally billed to appear on this episode.

Sarah Hadland on the end of Miranda

Sarah Hadland shares her thoughts on hit sitcom Miranda coming to a close, and how it might be made into a film.