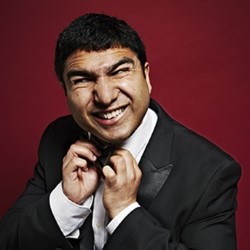 With Swallow leaving a trail of havoc in his wake, Mohammed gives his obnoxious anti-hero the chance to shine in the theatrical setting he's always been destined. As the production falls to pieces around him, with Swallow constantly berating his assembled production team,the show stutters towards its absurd, chaotic, and triumphant conclusion.

Featuring original compositions that span both the characters' swashbuckling exploits, and their performative shortcomings, Mr Swallow - The Musical is a bold and bombastic new production.

Alongside his solo live work, Mohammed is a BBC television/radio writer, classically trained musician, Magic Circle member, mathematician, and geo-physicist. Having originally gone to the Fringe as a member of the Cambridge Footlights, Mohammed presented his first solo character show Quarters in 2007.

Mr Swallow - The Musical is directed by Matt Peover, one of the country's finest young theatre and comedy directors. He has created work for Battersea Arts Centre, The National Theatre studio, Northern Stage, The Young Vic, Southwark Playhouse, Royal Exchange (Manchester), and The Lyric Hammersmith.