Donna is looking forward to starting her new job, if only she could remember what it is that HR actually stands for... Meanwhile, Gaz accessorises his wheelchair and decides that he wants to become a paralympian.
Preview clips 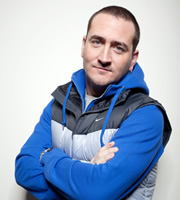 Over at The Archer, Tim starts to question his direction in life following his big revelation. He realises just how much he misses his wife and decides that he needs to track her down to see if their marriage really is over.

And Gaz convinces Billy to ask Cassie out on a date. She is overjoyed that he's finally noticed her and decides she's going all out to impress him - which includes removing her nipple rings.

Delayed from scheduled broadcast by 10 minutes due to overrunning Eurovision semi-finals.

Gaz tries to convince Billy to shag a giggling Cassie.

Tim describes to Donna what it is about his wife, Helena, that really attracts him to her.