Cassie and Billy are in lust and she couldn't be happier. Billy, on the other hand, thinks their sex life is affecting his football.
Preview clips 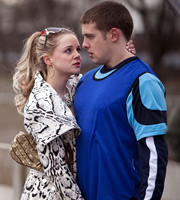 Cassie and Billy are in lust and she couldn't be happier. But Billy thinks their sex life is affecting his football and tries to cool things. But Cassie isn't having any of it and takes it upon herself to compete with the touchline Wags.

Gaz, determined to walk again, ropes in Donna, Billy and Tim to get him up and out of his wheelchair. Tim joins the smartphone revolution in a bid to find love through dating apps - until love walks straight through The Archer's door in the form of Leonard.

Donna is missing Janet and Louise and, desperate for a girly chat, decides to recruit a new best friend, which results in an amazing turnaround for Gaz.

Cassie and Billy reveal too much about the kitchen utensils they use in the bedroom.

Tim rather overreacts when Leonard simply says 'hey', and accuses him of being a pervert.