Gaz struggles to get used to his metrosexual carer Billy. Not only does Billy have manicures, he keeps calling him babe and trying to hug him. Billy is upset, but he's determined to win Gaz round no matter what it takes.
Preview clips 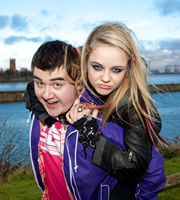 Gaz finally cracks and throws Billy out - but when disaster strikes, who will save him? Donna faces up to her responsibilities now she is the breadwinner, and heads down to the job centre. She is thrown when she sees her old nemesis from school and is left feeling inadequate that she too doesn't have a career. She battles with her pride before finally giving in and signing on the dole. Tim tries to give sister Cassie a makeover so that Billy will take more notice of her, and the world gets to see his Gok as he tries to help her discover her inner diva.

Billy encourages Gaz to be a little more metrosexual, but goes a step too far...

Tim Gets His Gok Out

Tim is trying to give Cassie a Gok Wan style makeover but she's not having any of it...