In the aftermath of the fire, Donna and Gaz are forced to move into Janet's old place.
Preview clips 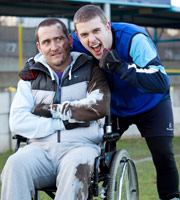 The couple react differently to their new situation; Donna embraces the fact that she is possession-free while Gaz feels he needs to live it up and plans a big night out.

Billy is determined to focus on getting his football career off the ground. He reluctantly agrees to go out with Gaz but, when things go disastrously wrong, it's up to Gaz to salvage Billy's only shot at a football trial.

Over at The Archer, Cassie tries to blackmail Tim into buying a motorbike for her. She desperately tries to find some dirt on him but isn't prepared for what she eventually discovers...

Donna is released from the shackles of clothing, and gets naked - much to Gaz's surprise.

Tim shares too much

Pre-empting blackmail from his sister Cassie, Tim reveals some shocking secrets about himself to the entire Archer pub.