Preparations for Big Alan and Celia's impending wedding day are in full swing. 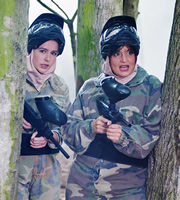 Preparations for Big Alan and Celia's impending wedding day are in full swing as friends and family gather for their stag and hen dos - there's a bit of a mix up, mind, one that sends Bobby on to the battlefield.

Power has gone to Aunty Brenda's head this week, too, when she refuses to service Dai Davies' 'empire of evil'. All the man wants is help with some planning permission.

Zoe, meanwhile, stands by her man after finding out about Luke's second job and the deadline for his growing debts.

On a happier note, it looks like romance could bubble once again between Stella and Michael when the pair join forces to track down Katie, who has snuck off on a date. An update at the episode's end, though, could ruin everything.