Election day has arrived and Aunty Brenda can almost taste victory - until, that is, a new rival enters the race. 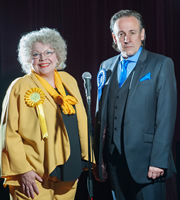 Election day has arrived and Aunty Brenda can almost taste victory - until, that is, a new rival enters the race. Dodgy bookie Iwan Jenkins may have hit the campaign trail late, but he quickly becomes a hot favourite. Free pens, it seems, work wonders in Pontyberry.

Aunty B begrudgingly accepts advice from cheating whatshisname Michael, who brings up a sore point: her complete lack of social skills. Cue a charm offensive and, later, some heroics from Michael and Stella after they manage to dig up dirt on Jenkins.

Elsewhere, everything that could go wrong does during Ben's date with Lily, and a 'lost' Paula finds a new direction in life.