New look. New job. New man? Life is as eventful as ever for Stella. 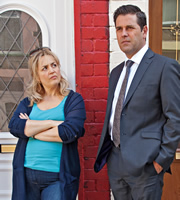 Now sporting a rather spiffy blonde do, the very single mum is focusing all her energy on her family and nursing degree, though the arrival of handsome lawyer and recent divorcee Michael - could prove distracting. The pair's first run-in is far from romantic, but by the episode's end they're going to find it hard to keep out of each other's way.

Aunty Brenda, meanwhile, is horrified to discover that her wayward daughter Verv is back from her travels. Someone who is glad to see her, however, is Yanto, or to use Verv's pet name for him, Doggy Man...

Elsewhere in Pontyberry, Big Alan panics when his solicitor tells him to put Little Alan on a diet, and nerves jangle as Emma prepares for an interview at swanky hairdressing salon Jensen's.

There's also a special two-for-one deal going on at the undertakers.