Although well-acquainted with Michael between the sheets, Stella starts to wonder how serious things really are between them. 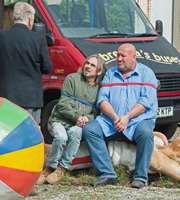 Stella starts to wonder how serious things really are between her and Michael. Issuing a sex ban, she tries to get to know the lawyer as more than just a handily-located plaything.

Are the pair in lust, or the other L word? The reality of being 'the other woman' in a relationship also hits home for Emma when Collette returns home from her trip to Ireland.

Big Alan, meanwhile, has a lot of making up to do to poor Celia - who sheds light on her painful past - but, first, has some mightily peed-off pensioners to deal with onboard one of Brenda's buses. The situation intensifies, requiring Aunty Brenda to exercise her somewhat lacking negotiating skills.

Plus, Luke's world threatens to come crashing down when a slip-up at work ends in a Lenny-steered disaster.