Ben is suspended from school. Luke, meanwhile, is let go by the police but can't escape the suspicions of those around him. 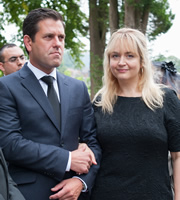 Being a parent is the hardest job in the world - someone who will 'cheers' to that is Stella.

The single mum struggles to keep her chin up this week as her kids move from one bad decision to the next, with Emma falling even harder for Marcus, and Ben being suspended from school. Eldest Luke, meanwhile, is let go by the police but can't escape the suspicions of those around him, including boss Dai.

Elsewhere, sad news awaits Alan when his brother - also called Alan (it's a family tradition) - stops by to tell him that their mum has died. Big Al hasn't spoken to either of them for years and, butting heads during the funeral arrangements, Bobby and Daddy do their best to keep the peace.

Events soon take a brighter turn, though, thanks to a very eventful service; Ben doing the right thing; and a new addition to Stella's household.