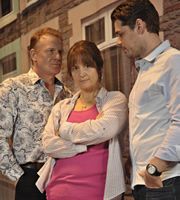 This new series joins Stella and Sean preparing for their new arrival, while Emma and Sunil adjust to married life. Domestic bliss looks doubtful for both, however, as Rob's business dealings bring him back to Pontyberry and Sunil enrols at a brainy (and boozy) medical school. Elsewhere, Dai begins work at the funeral home with wife Paula, creating untoward problems for the usually adventurous couple.

Catch up with lollipop man Alan too, who experiences a run of bad luck when his crossing is replaced by traffic lights. Karl and Nadine's new salon Tantastic Bodies, meanwhile, promises to make the town "browner and beefier", and they've already got a potential client in Aunty Brenda, a new arrival from Tenerife armed with bags of insults and an appetite to offend.