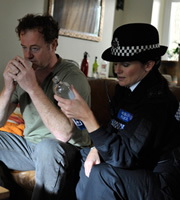 Paula, on the other hand, doesn't believe in suffering in silence like her estranged partner, and instead expresses her feelings at the long-awaited Got to Dance auditions, giving judge and guest star Ashley Banjo a show he'll never forget.

Bobby's first solo funeral also turns into a fiasco when two parties arrive at the cemetery to find only one plot, causing the funeral director to take unusual action to resolve the, ahem, grave situation. There's a rumble elsewhere in the valleys as Luke butts heads - and fists - with Lenny in the amateur boxing championship.

Meanwhile, Big Alan's 'Save Our Pitch' campaign scores a vital try towards victory as Rob quibbles the morals of his property development project. Melissa, though, is willing to use any means necessary to ensure her silent partner stays schtum about his doubts.