There's a ruckus as rows, rogue lovers and Russell Grant come to Pontyberry. 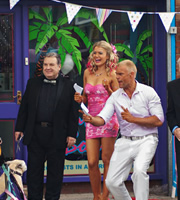 After back-to-back bombshells from the doctors and Sean, Stella and her neighbours agree that her life is officially over. The laundress feels destined to spinsterhood until Aunty Brenda arranges a job at the Bap Factory to bake away the blues. Her first day soon takes an unsavoury turn, though.

Britain's favourite ballroom-dancing astrologer Russell Grant sweetens the mood at Nadine and Karl's salon opening, but trouble looks written in the stars for the Valley's couples, especially Paula and Dai whose new costumes fail to solve their problems in the bedroom.

Stella's feared dry spell looks set to become a reality following an unpropitious reunion with Rob, while Emma fights for her man at Sunil's student ball.