Alan and Aunty Brenda team up to raise funds in a last-ditch attempt to save the rugby club. Off the pitch, Rob and Stella try to rebuild their trust in one another, but his secret threatens to ruin everything. 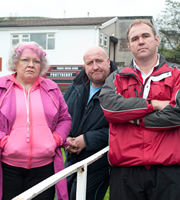 Wonders never cease in Pontyberry in the penultimate episode of the series as unlucky-in-everything Alan becomes the local Casanova. His previously untapped luck with the ladies comes in handy when his re-mortgage application gets rejected, teaming up with Aunty Brenda to raise funds for the rugby club. The pair organise a charity match and even manage to bag former Welsh international player Scott Quinnell to coach the locals.

Off the pitch, Rob and Stella try to rebuild their trust in one another, but the promising reunion is cut short by the surprise return of Sean, who has some eye-opening news. While Nadine and Karl plan to expand their family, Stella's is bursting at the seams once Zoe moves in, with Lenny continuing to pester the brood. It all kicks off on game day as Emma's pent-up anger with Sunil finally explodes, and Alan reveals the identity of Melissa's 'silent business partner'.