After confessing to Sean that a one-night stand with Rob could mean he's the father of her baby, Stella's heartbroken boyfriend plans to leave Pontyberry for good.
Preview clip 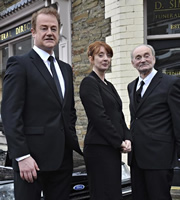 After confessing to Sean that a one-night stand with Rob could mean he's the father of her baby, Stella's heartbroken boyfriend plans to leave Pontyberry for good.

On their way back to the Valleys, however, are some familiar faces, including Luke who's been deported from Canada for hiding his criminal record. Bobby also returns and just in the nick of time for Paula - she's reached the end of her tether working with husband Dai, especially after his questionable use of make-up on the departed.

When motor-mouth Aunty Brenda goes into overdrive spreading the news of Stella's situation, the working mum wants to shield son Ben from the gossip. Luckily, he's too preoccupied with his own romantic secrets and building up his muscles to become "a little Jodie Marsh".

Alan and Sunil try to keep their families in the dark about their troubles too, but as thieves strike the house of the former lollipop man and Sunil gives into the temptations of student life, neither can keep up the charade for long. And as if she didn't already have enough on her plate, Stella goes for her first scan and receives some shocking news.

A story about death. Turns out a smile might not be a smile.