Enjoy a festive fix of Ruth Jones's hit comedy drama. When Michael has to head home for the holidays, Stella throws herself into work on the hospital's children's ward.
Preview clips 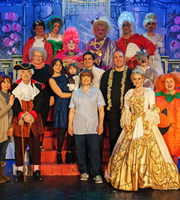 Looking forward to spending her first Christmas with Michael and meeting his folks, Stella sets to work cleaning and sprucing up the house. Excitement turns to disappointment, however, when Michael has to head back to Birmingham to deal with a family emergency. At least the hospital will keep her busy.

Assigned to the children's ward, Stel strikes up a bond with Billy, an 11-year-old patient with terminal cancer - he isn't that interested in getting to know the mum of three but she soon wins him over.

Pontyberry does panto, too, when a dictatorial Aunty Brenda puts her unique spin on the classic tale of Cinderella.

Join Stella and the locals for a Pontyberry Christmas.

Ruth Jones explains what is coming up in the feature length 2014 Christmas special of Stella.