Stella worries about Michael, who is acting out of character, while Aunty Brenda and the newly flush Dai lock horns during a fraught business meeting. 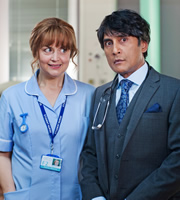 Hatchet-burying is required when Aunty Brenda and the newly flush Dai Davies lock horns during a business meeting. Could this be the end of a beautiful, albeit barney-filled, friendship?

Stella, meanwhile, is worried about Michael, who seems to be inching towards a mid-life crisis after splashing out on a motorbike and leathers - which, in fairness, he fills nicely.

Elsewhere in Pontyberry, Yanto pines for Cheryl, who we see a lot of this week, and Big Alan struggles to hold the fort at the café.