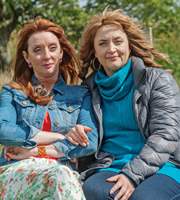 "Oh my god, it can't be!" - Stella is overjoyed when a strange, booze-swigging woman spotted at the end of her street turns out to be best pal and sister-in-law Paula. She says she left Tenerife to see Aunty Brenda, who, by the way, is on the mend, but Stels knows Paula isn't telling her everything.

Wires are crossed between Michael and Mr Honey, meanwhile, at Aunty B's welcome home party after the former steps up his efforts to win Stella back - stick with it, presh - and Big Alan worries that Celia is going to run off with ex-husband Dan (he even buys spanx), leading to the sweetest moment of the series so far.

The exceedingly good Jane Asher stops by in Pontyberry, too, when Luke explores an unlikely but lucrative career option after his 'mate' shows his triple-interest-rate true colours.