While Stella struggles to move on from Michael, Celia receives a blast from the past. Aunty Brenda's political campaign hits an unexpected snag, too. 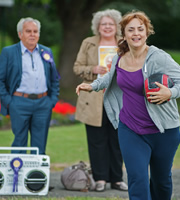 Moving on from Michael was never going to be easy, but it's proving nigh on impossible because of the bloody wall, or, rather, lack of bloody wall dividing their houses.

Stels is having a tough time of it, pure and simple. She's skint and a 'flying solo' shift at the hospital plummets when Beyonce - who surely has a stinging slap coming her way? - stops by.

Maybe a game of ladies' football will cheer her up, or an awkward drinks invite from Dr Honey?

Pal and colleague Celia, meanwhile, receives an unexpected blast from the past after bumping into her ex-husband Dan. He's no match, we hope, for Big Alan, though.

As for Aunty Brenda, she steps up her political campaign with partner-in-crime/lackey Dai Davies by her side, only to face an obstacle she hadn't prepared for.