Trouble looms for Stella and Michael when the latter makes a monumental mistake. Big Alan, meanwhile meets his match, and Dai organises a poker game. 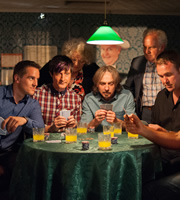 Trouble brews in Pontyberry when Michael makes a mistake that he's going to find tough to come back from. After being fired from the café by Little Alan, whose titanic ego needs puncturing, Michael heads to the local bikers' pub to drown his sorrows, and bumps into Beyonce - his flirty client from last week, not the superstar singer.

None the wiser, Stella brings Ben to the hospital with her in the hope it'll give him a much-needed nudge to think about what he wants do in the future, before impressing Mr Honey with a life-saving diagnosis.