Stella is ready to make amends with Michael, until, that is, she uncovers more secrets and lies. Elsewhere in Pontyberry, Dai Davies hits the campaign trail. 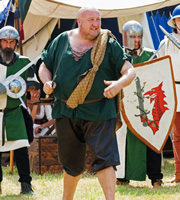 "It's like choosing a dirty doner kebab over a lovely bit of rump" - Big Alan couldn't have summed up the situation between Michael and Stella any better. Having given the lawyer the cold shoulder treatment for a couple of days, Stels is ready to thaw and make amends, after all, a drunken kiss is just that, a drunken kiss. Little does she know that Michael also got to know Beyonce between the sheets...

Putting the past behind them, the pair put on a good show at the Battle of Pontyberry (props to the historical society), only for a busty wench to ruin everything.

Luke's gambling problem looks set to spiral, too, when he accepts no-strings cash from a stranger.

It's not all doom and gloom, thanks to Dai Davies, who has decided to run for local council, with Aunty Brenda as his spin doctor.