The Chatsworth Estate is in a time of darkest austerity. The Gallaghers and half the estate are evicted as part of Operation New Start - a multi-agency crackdown on the benefits culture of those in social housing. 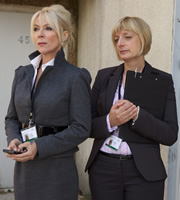 When the Chatsworth is the target of a coordinated Multi-Agency Government and Council Task Force, the estate is thrown into chaos... dawn raids, door-to-door coverage, a rolling herd of Suited Officials led by project consultant Carmen Kenaway and toxic sidekick, Feeney. Here to target the underbelly, the Task Force evicts families and withdraws benefits. The Task Force (Operation New Start) call it house-keeping; the residents call it Occupation. Families are ejected from properties with rhythmic regularity, and Jamie and Karen find themselves thrust into the role of guardians of the estate when evictees turn to them for help and refuge.

Whilst things look bleak for everyone else on the Chatsworth, all is bright for Jackson, who is now a fully-qualified teacher. The promise of a job and a better future brings another level to his pompous judgement of others; so much so that Jackson isn't shy about his agreement and support of the Operation New Start action, to the disappointment and embarrassment of Avril.

Meanwhile, Carl arrives back on the Chatsworth, days away from qualifying as a policeman. Not everyone welcomes him back with open arms, least of all Frank, and without his approval, Carl's sense of filial responsibility threatens to put a stop to his graduation.

But much worse than all of this - Frank Gallagher needs glasses. The very notion leaves him vulnerable, fragile; flawed and unwanted. For the first time, Frank must confront the possibility that he may be a less than perfect physical specimen.