It's Frank's 50th and Liam has the dubious honour of sharing the auspicious day with him on his 11th birthday. Uncharacteristically, Frank snubs the chance of a party, and instead opts to dwell in his own lonely loveless existence until... Libby, a local librarian literally falls into his life.
Preview clip 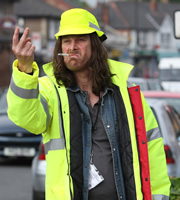 Frank Gallagher hits the big 5-0, which only serves to depress him - until he meets local librarian Libby. Libby's passion for romantic literature wakes in Frank something that has been dormant for so long... and then he meets her mother Patty who might just put a spanner in the works.

Eight months on from the tragic loss of Mandy, the Maguire family prepare to welcome a new addition to the clan, a baby son for Karen and Jamie Maguire.

With Christenings, riots, salsa, school reunions, sibling rivalry, shoot outs, cross dressing, weddings, gigolos and messages from beyond the grave... the wonderful, inimitable world of Shameless is back.

The trailer for the new series of Shameless.